005: How OODA Loops and Sensemaking help you Navigate Complexity with Clifford Morgan 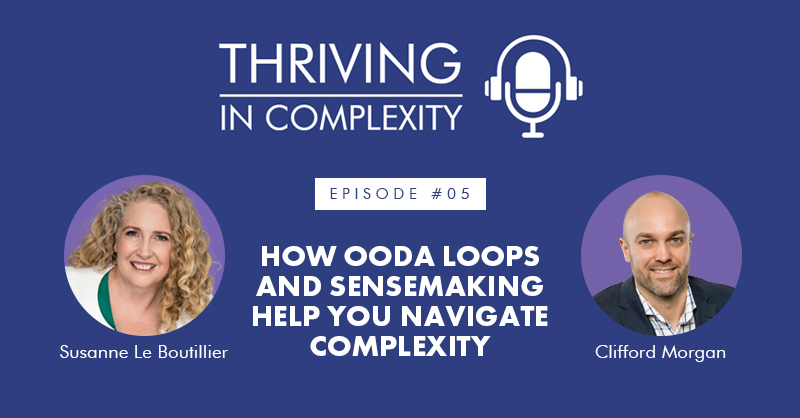 Life is full of uncertainties, complexities, and constant changes. It can be compared to a battlefield where one must be trained and prepared to face whatever happens next.

With all the complexities that surround our lives, we can forget there is still value in developing a plan, while we keep looking for available options and ultimately, keeping it simple.

In this episode of the Thriving in Complexity podcast, Susanne chats with Clifford Morgan, who is an Organisational Psychologist who also served in the Royal Australian Air Force. His wealth of experience helps clients achieve personal and corporate goals and fulfil the potential of their organisations.

Clifford’s expertise is strengthened by his military background and psychology training, and he shares how this knowledge can help people become effective and transformational leaders in a changing environment. He believes that leaders have the capacity to make others a better version of themselves while helping them to navigate complexity.

If you want to know more about how you can apply proven military techniques to respond to complexity and become a coaching leader, this episode is for you!

WHAT YOU’LL DISCOVER IN THIS EPISODE:

“If the scenario is super complex, what we don’t want to do is to add to the complexity in order to achieve our goals, we need to simplify as much as possible.” -Clifford Morgan

“You can be a successful leader in one context, but as the context changes you’ve got to respond to that.” -Clifford Morgan

“Everything you do as a leader is an opportunity to develop your people.” -Clifford Morgan

WHERE TO FIND CLIFFORD MORGAN

Cliff has been a lifelong student of leadership. Since his teenage years, he’s always loved the topic of people and how to lead and influence them to achieve shared goals. It is part of what drove him towards a career in the military that so far spreads over 16 years.

He has seen first-hand the effects those leaders and the quality of leadership can have on people. He’s been part of teams where poor leadership has undermined performance, eroded morale, destroyed culture, and broken people. He has seen those broken people not only fail to live up to their potential at work, but also go home unable to be the husbands, wives, mothers, and fathers that they should be. All too often this has led to broken marriages and broken families.

As a result, Cliff wages war against the perpetuation of poor leadership.

At the same time, Cliff has also served with leaders who showed the very best of what a leader could be. Those who lead in a way that transform people into better versions of themselves. Better people mean better teams and better organisations. More importantly, these ‘better people’ went home and were able to be better husbands, wives, fathers, and mothers, able to build better families, better communities, and ultimately a better world.

During his time in the Air Force, Cliff was instrumental in establishing the Air Force Leadership Coaching Program at a local level at RAAF Base Amberley. In this capacity, he coached military commanders and trained hundreds of Air Force personnel and leaders to use coaching skills to lead more effectively and be more intentional about developing people and capability.

After 8 years of full-time service, Cliff hit the books and spent eight years studying to become a fully endorsed Organisational Psychologist. Nowadays, Cliff is the Executive Director of Lumian Consulting, where he spends his time helping senior leaders and their teams pursue their potential to perform at their peak.